A key part of our approach at Kavango is our commitment to Botswana, which is home to our entire project portfolio.

Based in Southern Africa, the nation spans more than 580,000km2 and has a population of some 2.3 million individuals–more than one in ten of whom live in the large capital city of Gaborone.

We believe that, in 2022, there are many reasons why Botswana is a favourable destination for mineral exploration…

Botswana enforces a multi-party democratic tradition, with general elections held every five years. As it stands, the nation has a rating of 1.09 points on The World Bank’s Political Stability index; far above the world average of -0.07 points.

A strong and rapidly growing economy…

After a 2020 contraction at the hands of Covid, The World Bank reports that Botswana’s economy recovered greatly in 2021, expanding by 8.5%. Meanwhile, the nation also has the fourth-highest gross national income per capita in Africa.

Highly regarded investment destination…
Botswana has repeatedly been rated among the most attractive jurisdictions in Africa both in terms of policy and mineral potential by the Fraser Institute.

Supportive and sustainable mining legislation…
In Botswana, the granting of a mining licence relies on clear and transparent criteria. In particular, applicants must show that they have the financial resources, technical competence, and experience to carry on effective mining operations in an environmentally friendly way.

Well established infrastructure…
The emergence of Botswana’s enormous diamond mining industry has given rise to a quality infrastructure system spanning the transport, water and sanitation, power, and telecommunications sectors.

Botswana is already well-established as a leading African diamond producing country, with the precious mineral currently accounting for around a third of government revenue. However, the nation continues to offer a great deal of untapped potential for minerals because it is largely covered by thick Kalahari Desert sands.

Until recently, this “Kalahari Cover” had been difficult for exploration and drilling technology to penetrate in any meaningful way. As a result, areas that were highly prospective for mineralisation and would otherwise have been explored were overlooked–including much of what is now Kavango’s project area.

But this is now changing. Recent advances in mineral exploration are overcoming such barriers entirely and opening new opportunities for the first time.

A major investment by privately-held Khoemacau Copper Mining has led to the opening of a world-class copper mine set to produce 60,000 tonnes of copper and around two million ounces of silver per year.

The Motheo (T3) copper project worked up by Metal Tiger and now owned by Sandfire, meanwhile, also looks set to come on stream, with first production scheduled for 2023. There are other deposits in the pipeline as the pace of work in the Kalahari Copper Belt accelerates as well.

Kavango is positioning itself to join this growing list of success stories by exploring its licence areas with state-of-the-art technology such as: Location of the three Project areas in Botswana with neighbouring countries 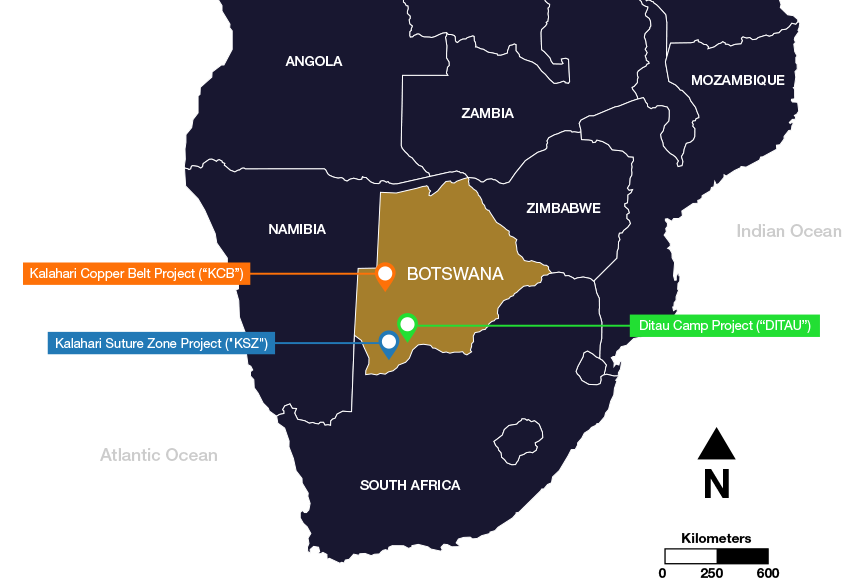 Location of projects in Botswana

The Department of Mines and Ministry of Mineral Resources, Green Technology and Energy Security (MMGE) maintains data regarding mining throughout the country. Debswana, the largest diamond mining company operating in Botswana, is owned as to 50:50 by the government and De Beers. In 2007, significant quantities of uranium were discovered, and several international mining corporations have established regional headquarters in Botswana, and prospected for diamonds, gold, uranium, copper, nickel and coal.

Mining activities have been taking place in Botswana since the nineteenth century with the advent of the gold rush in the northern part of the country. Diamonds have been the leading component of the mineral sector since large-scale diamond production began in the early 1970’s. In 2016, Botswana was the world’s second leading producer of diamonds by value. The country also produces coal, cobalt, copper, gold, nickel, platinumgroup metals (PGMs), salt, sand and gravel, semiprecious gemstones and silver.

MMGE oversees the operations and development of the energy, water and minerals sector in Botswana. Mining activities are chiefly administered under the Mines and Minerals Act, 1999 as amended from time to time. This legislation allows the government to acquire a minority stake (generally 15%) in mining projects, at the time of the grant of a mining licence, as a partner and seek participation in the mining projects through board representation. The act regulates the issuance of exploration and mining licenses and tries to reach a balance between mining activity and environmental impact.