These may be unfamiliar, but they could also be very significant for the work we’re doing in the Kalahari Copper Belt.

In the simplest terms, an anticline refers to a geological structure beneath the ground that arches up.

Conversely, a syncline refers to a structure that arches down.

So, imagine a valley.

You can see an example of what they both look like in the diagram below, courtesy of Advancing Earth and Space Science: 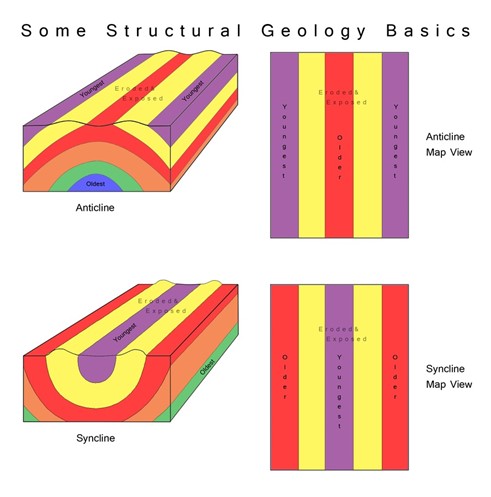 But why are these two structures so important?

Well, imagine if you were drilling into the ground hoping to find the top of an underground hill - or an anticline…

But when you drilled into that ground, instead of a hill (an anticline), you encountered a valley (a syncline) instead.

You’d miss the top of the hill.

And because the valley potentially dips much deeper down, you’d run the risk of missing its bottom—the syncline—too.

You could well think your economic drill targets were not there.

Or worse, have spent a lot of money proving they were out of range.

In very simple terms, this is effectively the situation we believe some explorers have found themselves in when searching for the D’Kar/Ngwako Pan contact zone that controls mineralisation in the KCB.

A change of thinking

Up until now the consensus thinking—and frustratingly, that included our own—has been that the most prospective ground for mineralisation in the KCB typically occurs where the D’Kar/Ngwako Pan contact sits under or around anticlines and some form of other rock structure has “cross cut” this horizon.

However, we believe the D’Kar/Ngwako Pan contact around synclines could also be prospective, so long as another cross-cutting structure is present.

To date, we are not aware that anyone has successfully managed to test this theory, so why has our thinking changed?

We’re the first company to use CSAMT in the way that we are to explore the KCB. And after 10 months of refining and calibrating our collection, processing, and analysis of data, we’ve shown we can produce sharply defined visual slices of resistive contacts down to 4km in the region.

Now, following our most recent KCB update, we’ve gone some way to proving that this same CSAMT technology can identify the location and depth of prospective D’Kar/Ngwako Pan contact on both anticlines and synclines without drilling.

Work to confirm this is underway, with a KCB-experienced local geological contractor re-logging and analysing drill core and rock chip samples from recent drilling and a hole planned post the Christmas break.

But if we are successful, then it could be very significant.

After all, Airborne Electromagnetic surveying is usually only effective down to around 300m. So, with the D’Kar being up to 1,500m thick in places, drilling anything but the very shallowest targets has been highly difficult in the past.

We could be on the verge of changing this.

I’ve said before on many presentations, I believe CSAMT technology will be a game-changer for Kavango, and for exploration generally in the KCB. With the recent data we’ve been receiving, I believe it even more.

Of course, there’s more to do to confirm the CSAMT…

But there are three very strong clues, perhaps I might even say points of confirmation, that our CSAMT imaging is right

First, there’s the fact that CSAMT identified the structures around Sandfire’s Kronos occurrence, which is relatively shallow.

This gives us a firm data point we can compare from the images to reality.

Second, our CSAMT data suggested that we would hit what’s known as a “Breccia Zone” at around 350m in our drill hole KCBRC005.

“Brecciation” is a process that sees rocks beneath the ground become fragmented and broken up.

Hitting the Breccia Zone where we did on KCBRC005 is a potentially encouraging sign because this can be the type of cross-cutting structure that might have allowed liquids to flow through the region and copper/silver deposits to be collected at the D’Kar/Ngwako Pan contact.

That is not to say we’ve yet identified a mineralising system in PL082, but this smaller Breccia Zone at 350m gives us another data point that appears to confirm CSAMT surveys can identify the right sort of structures where mineralisation can occur.

And, incidentally, this Breccia Zone could ONLY be identified by CSAMT–there were no surface expressions of its existence.

Thirdly, and this might be most important, our CSAMT surveys over PL082 appear to have identified a syncline on our property that graduates to becoming an anticline on Sandfire’s ground, where the Kronos occurrence occurs.

This could be a huge help in future targeting and, all in all, gives us confidence that we could be onto something big at the KCB.

See the syncline for yourself

All this talk of anticlines and synclines and brecciation…

I realise it gets very technical. But hopefully you can see the significance yourself in this image:

You can see the syncline shape there on our ground in the centre (the “valley”) and the anticline (dome) on Sandfire’s ground to the right, where CSAMT identified the structure around Sandfire’s Kronos occurrence. 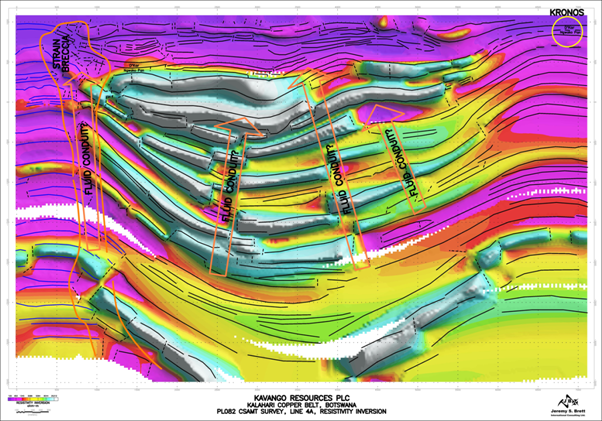 Though the CSAMT tells us more about what’s beneath the ground than we’ve ever known before, it does not tell us the individual rock units.

In other words, we still must confirm where the D’Kar/Ngwako Pan contact exits and what—if any—mineralisation has occurred. To do that, we need to continue drilling, which we are doing.

This is made difficult by the fact we’re dealing with brecciation, which creates gaps in the earth that the water we use to cool our drills disappears down.

It’s not helpful, but it’s all part of getting closer to where we want to get to.

In an ideal scenario, our drilling will confirm our suspicions, prove that the D’Kar/Ngwako Pan contact also occurs under and around a syncline, and, we hope, evidence of a mineralising system.

Of course, that last point would be incredible.

But what we could find is that the contact is deeper than is economically viable.

This would still be positive as it will act as further technical support for our CSAMT modelling. We could then turn our attention to the more southern part of our license, where we believe the syncline arches closer to the surface (based on the apparent dip of the area’s geology).

Of course, finding metal in the ground is the ultimate goal, but this is all highly encouraging, which is why I wanted to go into this detail with you today.

For shareholders of Kavango, I hope this will prove to be very positive—not just for what’s going on at the KCB, but the way it endorses our technology and approach to exploration.

I’ll be sharing much more on this over the coming weeks into the New Year, but if you have any questions in the meantime, don’t hesitate to get in touch.

Otherwise, I hope you’re all enjoying the holiday period, and I hope this news—and all this talk of anticlines and synclines—brings you some festive joy. It certainly has for me.