Small gains build the foundations for big ones

Have you read the book Atomic Habits by James Clear?

It’s good, and I recommend it.

I’ve been reading it recently and I’ve taken a lot away from it.

One thing that got my attention was something James Clear wrote about making small improvements and how, by doing so, over time they compound to create big ones.

I know it’s not a new idea, but it is powerful.

I’m sure you’re familiar with Einstein proclaiming that compound interest is the eighth wonder of the world.

“Compound interest is the eighth wonder of the world. He who understands it, earns it; he who doesn't, pays it.”

But still, when I came across this section in Atomic Habits, it struck a chord with me.

I think it’s partly down to where we are right now with Kavango.

Here’s a snap from the book I found on Twitter: 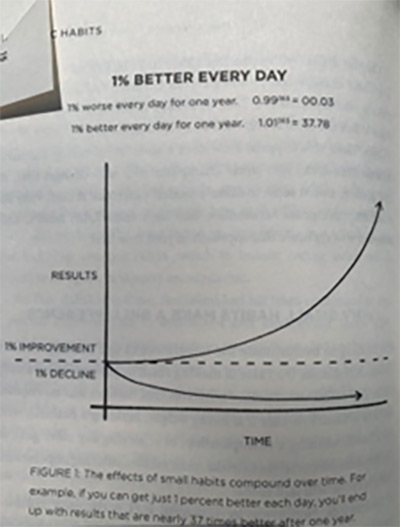 You can see the idea right away.

If you aim to be just 1% better at something every day, the cumulative effect soon gives you a much greater return than the initial promise of a 1% gain might suggest.

As I say, I related to this because when I set out at CEO of Kavango, my plan was similar.

I wanted—still want— for Kavango to become a world-class minerals exploration explorer in Botswana...

I knew we wouldn’t be able to achieve it overnight. I knew that to achieve such a goal, we’d have to slowly build over time, improving, if you like, by 1% each day.

And right now, with all the momentum we’ve got behind us, I feel like that calm and considered approach is starting to pay off.

Applying the 1% rule to the bigger picture

I had this idea in my head for the rest of the day, and it got me thinking...

Sure, the idea struck me because it reminded me of the approach that we’ve been taking with Kavango…

Striving to make small, incremental improvements to our operation over time that could potentially accumulate into something much greater…

Or fine-tuning our exploration techniques to make sure we’re focusing our efforts in the most effective way we can...

They all represent incremental improvements that add up in the long run.

But then I started to wonder what would happen if you applied this idea to investment more generally.

In the exploration space, and particularly where small cap companies are concerned, let’s face it...

We’re looking for opportunities that could potentially deliver us outsized returns.

That’s the aim. It would be silly to deny it.

But I think sometimes, in seeking those outsized gains (that are often realised in a short, sharp boom on discovery, or extremely positive news), we forget that it’s only with consistent and incremental progress that a company like Kavango can even hope to position itself to potentially deliver those much bigger returns.

But to achieve them, it’s worth remembering that you often have to take gradual steps.

I think it’s an interesting thought, and I hope you don’t mind me sharing it with you.

As I say, I’m feeling very positive about where we’re at with Kavango right now and with the momentum we have building, I’m excited about what the future has in store.

There’s lots of news to come and I’ll be sure to keep you up to date as ever, but in the meantime, as I say, if you’ve not checked out Atomic Habits, it’s well worth a read.