How we’re maximising our chances of making a KCB discovery

Over the last year we’ve quietly gone about our business in the Kalahari Copper Belt (“KCB”). But make no mistake, this is where we have focussed most of our operational energy.

We believe this is where we have our highest chances of success, and we are now nearing the point where we feel ready to drill.

Progress might have taken longer than we would have liked, but what matters now is where we are today and how we got here.

Since we first identified large potential target areas in our prospecting licence PL036, just over twelve months ago, the scale of our KCB opportunity has become clear.

Kavango has five exploration teams in the field. Since July 2021, four of these have been permanently hard at work in the KCB, surveying and sampling our ground in this exciting copper province.

It’s demanding, time-consuming work, but it’s vital if we are to maximise our chances of drilling success.

What’s important to remember is how much ground we have–5,348km2. That’s equivalent to the size of Norfolk.

As I explain below, the geological setting of our land package is highly prospective for copper/silver deposits, with three projects that are particularly encouraging – PL36 (which is just south of the town of Ghanzi), the smaller PL082 (which is right in the heart of the Belt) and the Mamuno licences (set right against the Namibian border, with exploration ground held by Sandfire Resources immediately to the north and Rio Tinto to the west).

In other words, we have a huge amount to go for and we are using our resources carefully.

The key to this, really, is to ensure we have as deep an understanding as possible of our priority exploration areas, and that we define our drill targets as tightly as we can. We’re shooting for the bullseye and have confidence our meticulous approach will pay off. 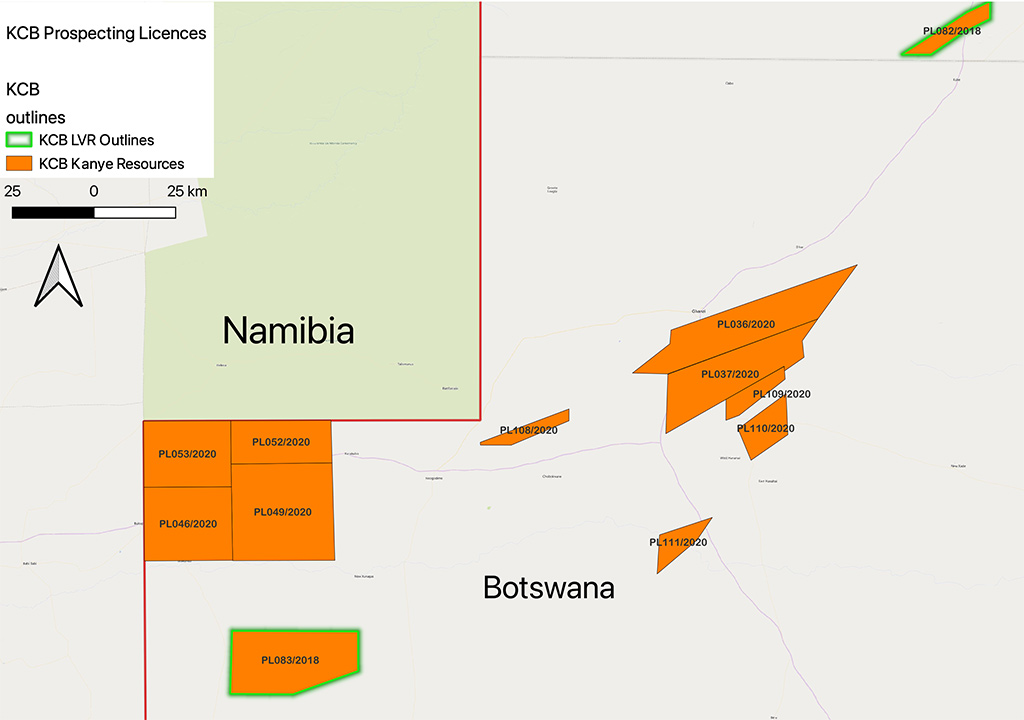 Position of Kavango’s prospecting licences in the Kalahari Copper Belt

It all means acquiring the high resolution we desire of our target areas in the KCB takes time and focussed effort.

Take the geological mapping programme we recently completed, for example.

First, this involved compiling all available historical maps and information about the licences and even relogging local water boreholes. Then, our teams physically walked the ground, searching for features such as outcrop and other geological indicators. Once mapped, these were then used as vectors for further exploration.

It was certainly no overnight task, but it has already proven itself invaluable.

The work mapped multiple instances of the key “Ngwako Pan-D’kar formational contact” across our licences for the first time. These are areas where the two rock formations meet, and they are closely associated with the copper-silver deposits and discoveries elsewhere in the KCB.

The contacts go a considerable way towards validating our belief that the western half of the KCB is prospective for copper but has been overlooked because of sand cover.

But the work needed to ensure our drilling is as well-informed as possible by no means stopped there.

No, to heighten our target resolution, our next step has been to launch a high-resolution soil sampling programme centred around those mapped Ngwako Pan-D’kar formational contacts.

Without getting into too much detail, each sample–of which we are taking roughly 8,000–much be collected from a small, excavated hole, sieved, and inspected by our XRF Analyser. Batches are then periodically taken for interpretation before selected samples are sent to an independent lab in South Africa for multi-element analysis.

Again, this work is helping us to sharpen our targets.

As announced this week, a closely-spaced 5,145 soil sample programme on licence PL036 has confirmed four copper targets that fit our mapped Ngwako Pan-D’kar formational contacts. Critically, three of these conform to the previously identified Acacia, Morula, and Happy target areas while the fourth sits in an entirely new target area we’ve named Kudu.

From here, work remains ahead of drilling.

At PL036, we will use our latest results to reinterpret geophysical data we acquired in 2021 and complete infill soil sampling where needed to help us rank our targets. We also plan to carry out a Controlled Source Audio Magnetotelluric (“CSAMT”) survey over the target areas aimed at learning more their subsurface structures.

Meanwhile, we expect to complete ongoing soil sampling and target delineation at our other two KCB project areas by the end of August. We are particularly excited about these, given PL082 is a possible analogue for Khoemacau’s 'Banana Zone' deposit, which sits to the immediate south of Ghanzi Ridge, and the Mamuno licences lie close to the central axis of the KCB adjacent to the Namibian border.

But the bottom line is we are moving ever closer to drilling at the KCB. In fact, preliminary discussions with contractors are already underway for a planned programme later this year.

And while their arrival might be taking a longer amount of time than some had assumed, if these holes are ultimately able to lead us to one or more areas of economic copper mineralisation, then it will have been more than worth the wait.