Though the country has many positives, Botswana’s biggest challenge has thwarted many. Until now.

How come no one saw this before?

That’s the first question you’d be forgiven for asking when you initially come across the extensive work we’re doing here in Botswana.

At Kavango Resources (LON:KAV), we’re in the process of uncovering what could be massively untapped sources of base and precious metal deposits.

The investigations we’ve already completed in the country suggest there could potentially be huge finds across our different project areas.

And, with each new update coming out of those projects, it seems the scope of the opportunity is only getting bigger.

Add to that the fact that Botswana itself is ranked by the Fraser Institute as one of the most attractive regions for investment globally—especially given its well-developed infrastructure and lack of corruption—and you do wonder...

Really, how come no one saw this before?

On that note, how did we, a relatively young company, manage to beat so many others to the opportunity?

Though there are naturally several factors contributing to our success so far, perhaps one of the most fundamental is technology.

Before now, others who’ve tried to explore areas around where we’re focusing have simply not had the equipment to do so.

You see, Botswana’s biggest challenge to explorers has always been the same:

It’s why, in our opinion, figuring out a way to explore beneath the African nation’s thick sand cover has always been the key to unlocking its true wealth.

A little patience goes a long way: overcoming the challenge of the Kalahari

The huge Kalahari Desert covers nearly 70% of Botswana and, though the ground beneath may potentially be rich with base and precious metals, the sand cover imposing the area has made proving so much more difficult.

Indeed, the well-known and daunting ‘Kalahari sand cover’ has foiled many who’ve tried to explore the region in the past.

For example, back in the 1970s and 1980s, an exploration team funded by the Canadian government looked to investigate the same Kalahari Suture Zone (known as ‘the KSZ’) that we’re now exploring.

At the time, limits in technology meant that the Canadian team were soon forced to give up and move on, leaving the KSZ still largely unexplored, hidden beneath the Kalahari sand cover.

However, one of our founders Hillary Gumbo felt the area still had potential. They understood that, if they had the right technology, then proving so would be a whole lot easier.

It’s one of the reasons that, as well as aligning ourselves so closely with Botswana itself, we’re also putting technology at the heart of everything we do.

In fact, by embracing modern mining exploration technology and experimenting with the latest breakthroughs, we hope to put ourselves at the forefront of metal discoveries in the country.

Speaking with our CEO Ben Turney recently, it’s clear he personally believes very strongly that our adoption of modern technology is one of the smartest edges we have over the competition.

“It’s been game-changing,” says Ben. “It’s exciting to see the new ideas our partners develop and figure out ways in which we can use their tech to evidence further the potential present in areas that might have otherwise been overlooked.”

The three specific tech breakthroughs Ben cites as being most transformative for our fortunes in the Kalahari are TDEM surveys, AMT surveys, and improvements in the modeling software we’re now able to draw on: 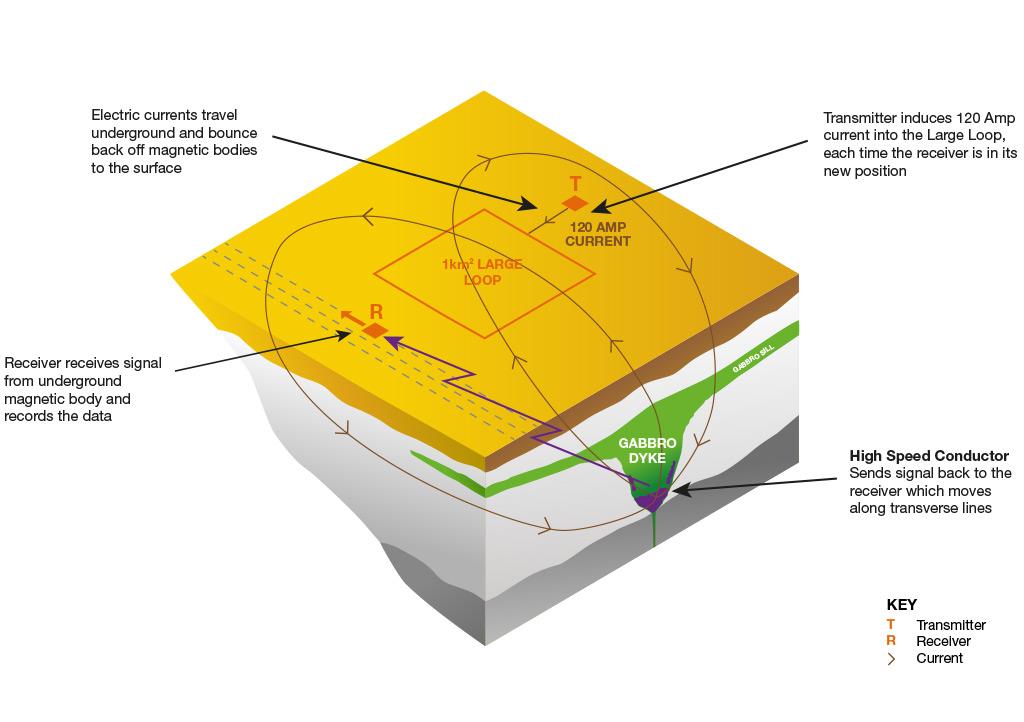 As you can imagine, by combining these different technologies, it’s much easier to build up a picture of what’s in the ground beneath the Kalahari sand cover.

Where such detail and accuracy would have been impossible in the past, today companies like ours—who embrace the tech and use it drive their ambitions—are able to gather a much clearer picture of what’s going on during exploration.

Not only does it create more transparency around what’s going on beneath the surface, but it also helps us to be more transparent with investors too, which is something we pride ourselves on.

Of course, when it comes to exploring, a company’s success relies largely on making a discovery.

But, as we all know, exploration is necessarily a speculative venture, and not all projects can come good.

The key, then, is to minimize the risk of embarking on projects that don’t lead to discovery.

This is why it’s so fundamental to embrace modern advancements in technology such as TDEM surveys and AMT surveys alongside the various developments being made in below surface modeling.

You see, by building more accurate imaging of what’s going on in the ground before needing to incur the massive costs that come with drilling, we’re able to expand our scope, cover more projects and bring greater opportunity to potential investors.

And it’s why we’re excited to continue to explore the next advancements in exploration technology too.

As the industry develops, so do we, and we continue to seek out ways we can take advantage of new technologies to help us unlock even more of the potential that the great country of Botswana offers.

And we’ll be sure to keep you informed of all the latest developments.